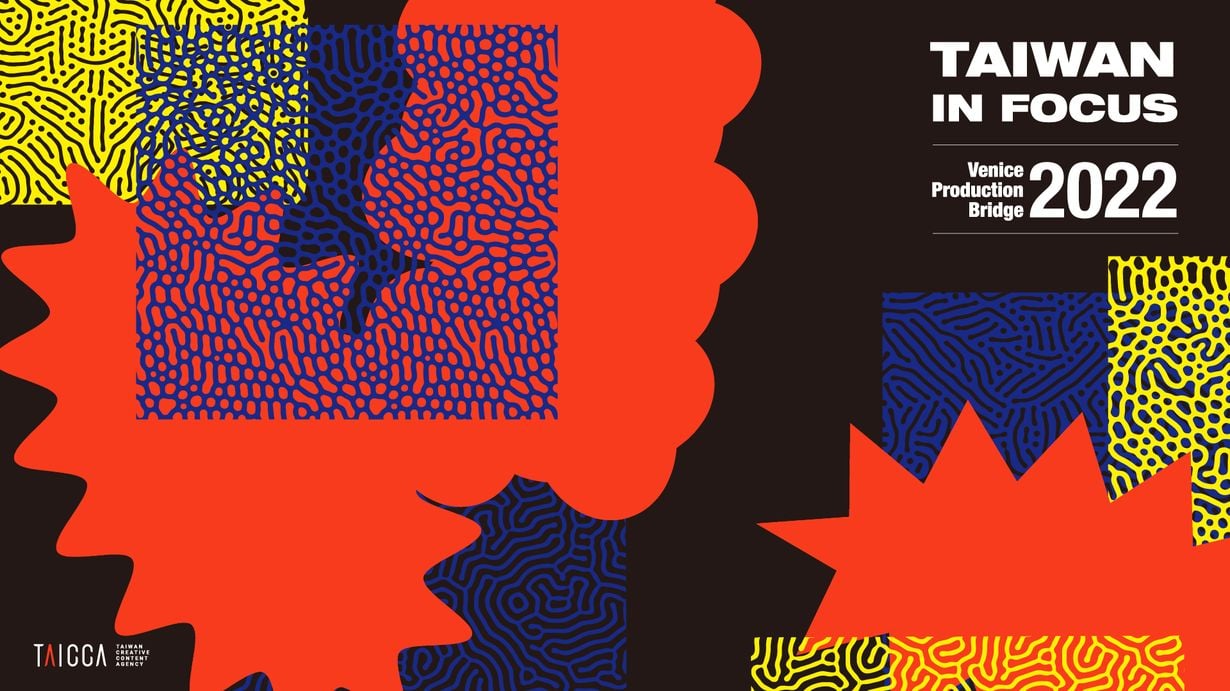 In the spotlight this year at the invitation of the 2022 Venice Production Bridge (VPB) of the prestigious Venice International Film Festival are several projects from Taiwan. A total of five films and four immersive projects have been selected for the Gap-Financing Market, and three publishing houses and literary agencies have been invited to the Book Adaptation Rights Market where they will have the opportunity to meet one-on-one with producers. Outside of the Markets, two films co-produced with Taiwan have been selected for the competitive Orizzonti section and Giornate degli Autori section (Venice Days); three projects made the line-up for the Venice Immersive competition; and one newly restored film will premiere at Venice Classics. At the center of Taiwan’s participation is the Taiwan Creative Content Agency (TAICCA), who for the first time, will have a booth in the Venice Immersive Market, the XR-Extended Reality section of the festival. TAICCA will further take part in the industry forums and networking events to advance the Taiwanese film industry’s position on the global stage, expand opportunities for collaboration, and gain an advantage in the international market. 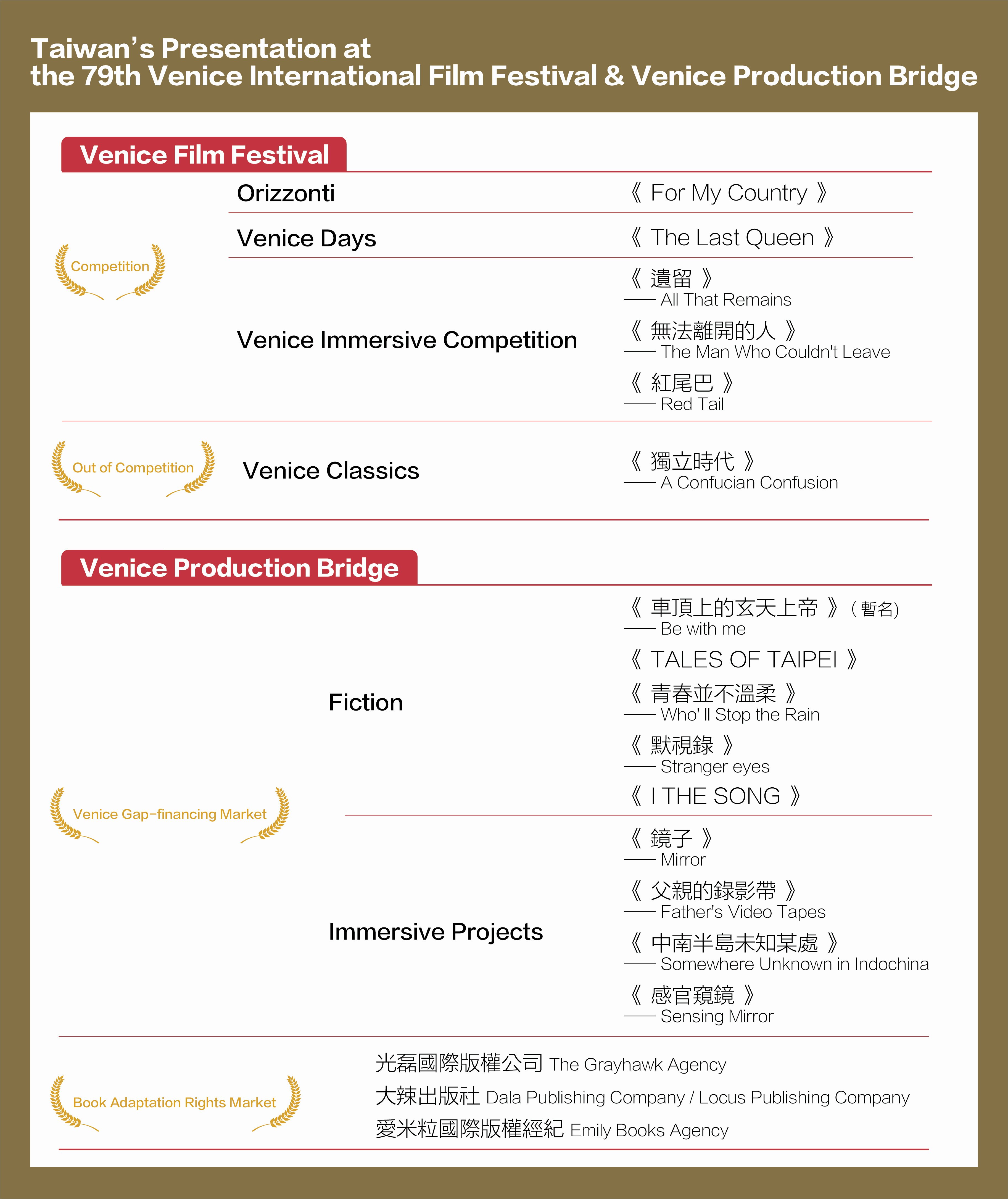 Pascal Diot, the Head of Venice Production Bridge, expressed his excitement “to see Taiwan as a VPB Focus this year.” In recognition of TAICCA’s contributions to the festival Diot stated, “TAICCA is a key player in the audiovisual and the new media landscape, and the both the immersive and traditional content they have provided are going to attract a lot of professionals and general public….We are proud to support TAICCA in their international work, including international co-productions.”

TAICCA CEO Izero Lee echoed Diot’s sentiments in regards to Taiwan’s selection as a VPB Focus and added that the honor signified global recognition of the quality of Taiwanese-created content. The Venice International Film Festival is a valuable opportunity for Taiwan to get exposure on the international market according to Lee, who believes the Festival is an excellent chance for all to expand international ties and explore co-financing or co-producing projects. These opportunities also include working with Taiwan who, Lee stated, “is the best partner to collaborate with in Asia.” 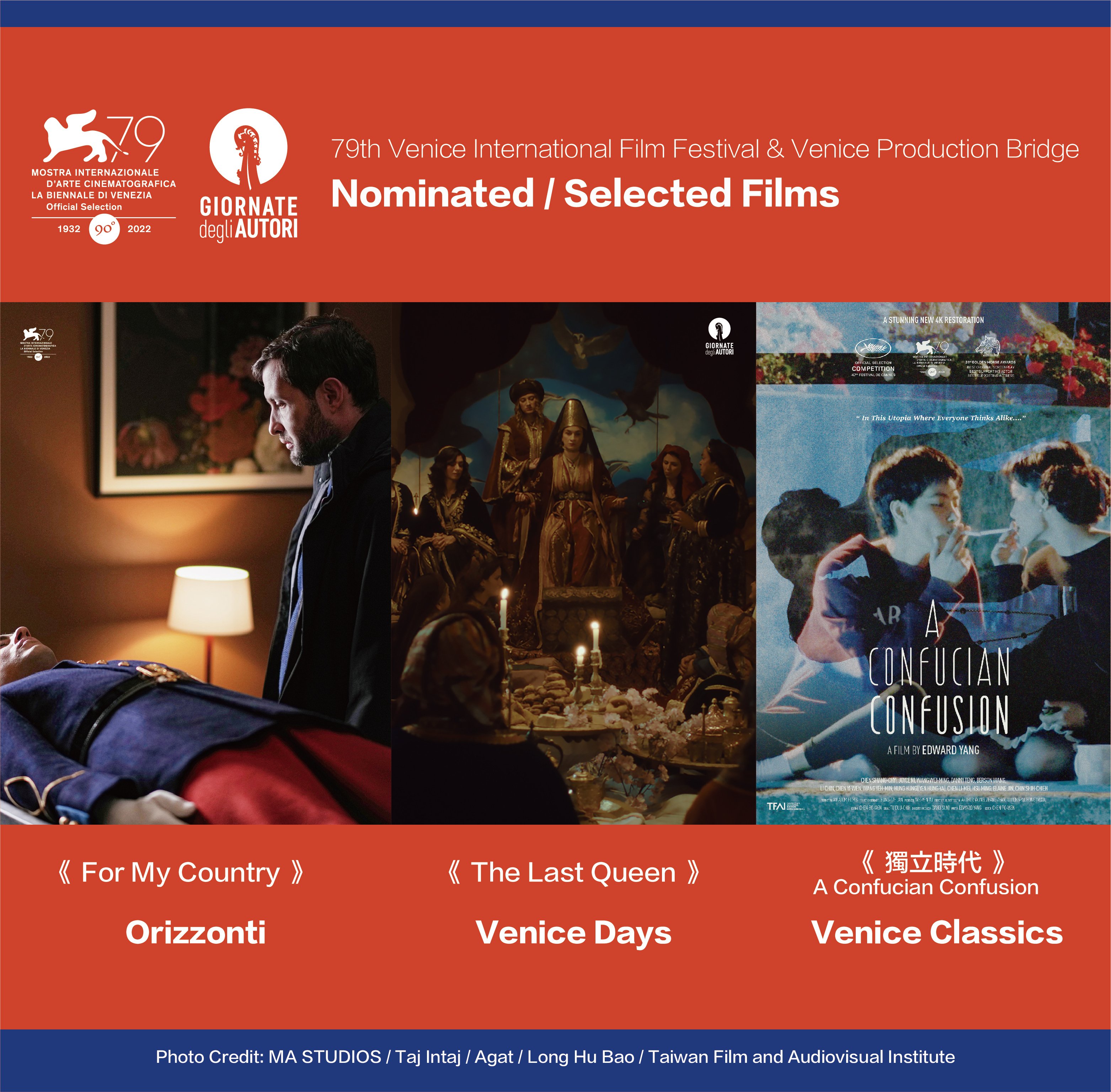 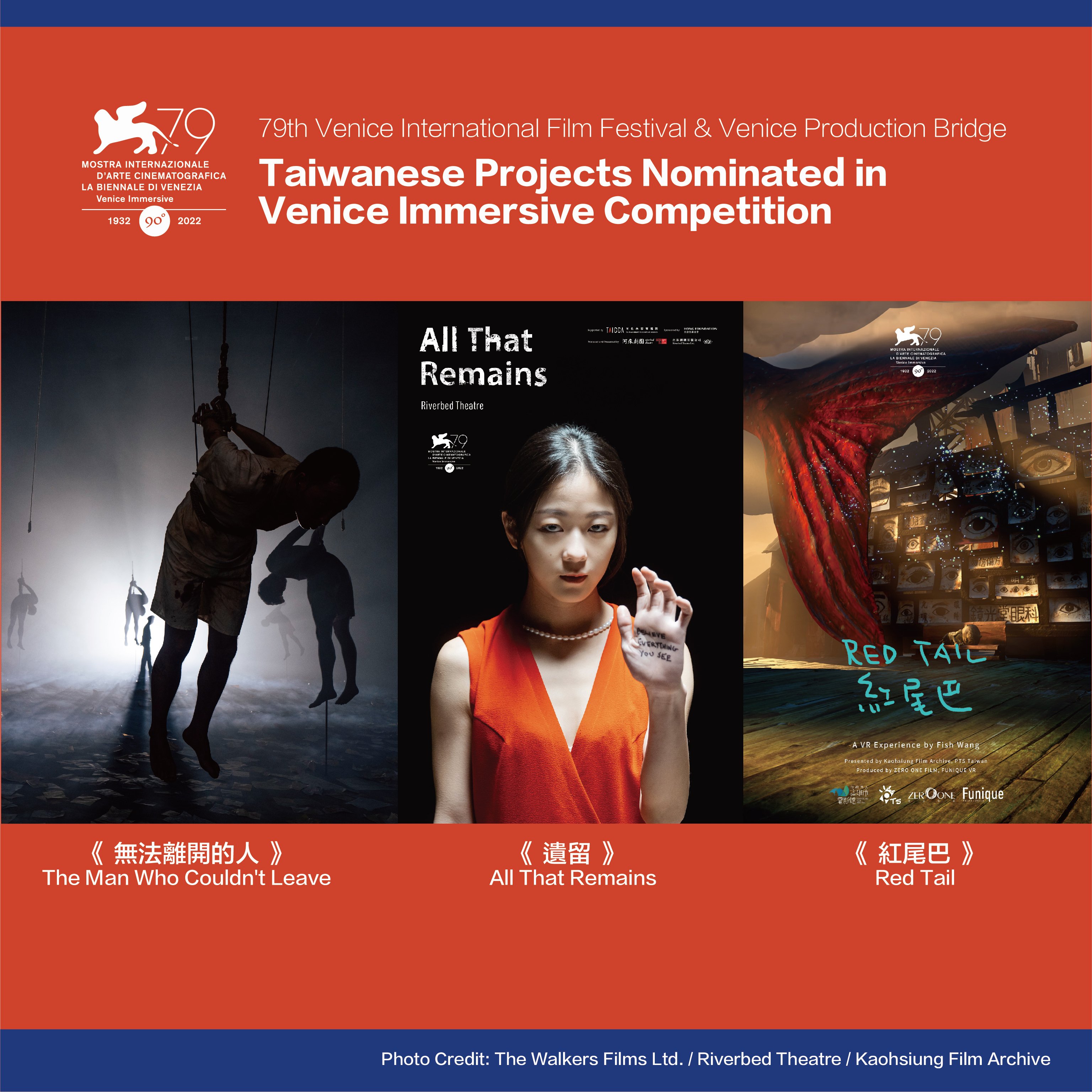 Of 240 submissions looking to take part in the Gap-Financing Market, 63 were invited to have the opportunity to meet one-on-one with professionals and secure financing for their projects. Last year alone, the Market attracted over 1,500 professionals and facilitated over 800 negotiations. This year, five films and four immersive projects from Taiwan have been invited to the Market. The five feature films include: Be With Me from executive producer Hou Hsiao-Hsien and director Hwarng Wern-Ying; Tales of Taipei by executive producer Bowie Tsang and producers Maxx Tsai and Amy Ma in conjunction with ten directors from around the world; Who’ll Stop the Rain, by executive producer Lin Shih-Ken and directed by I-Hsuan Su; Stranger Eyes from Volos Films Ltd. and Golden Horse Award winner Yeo Siew Hua; and finally, a film previously screened at the Panorama section of the Berlinale, I, the Song by Bhutanese director Dechen Roder. In the immersive section, the festival has invited four projects from Taiwan : Mirror, the first VR work from De-Chuen Wu, winner of the Golden Horse Award for Best Animated Short Film; the VR project Father’s Video Tapes from new media and theater director Baboo Liao; a co-creation by Asio Liu and Feng Ting Chou, Somewhere Unknown in Indochina; and a multi-person immersive experience by the promising director Lin Pei-Ying entitled Sensing Mirror. The latter two were among the eleven projects developed during the 2021 Biennale College Cinema for Virtual Reality. 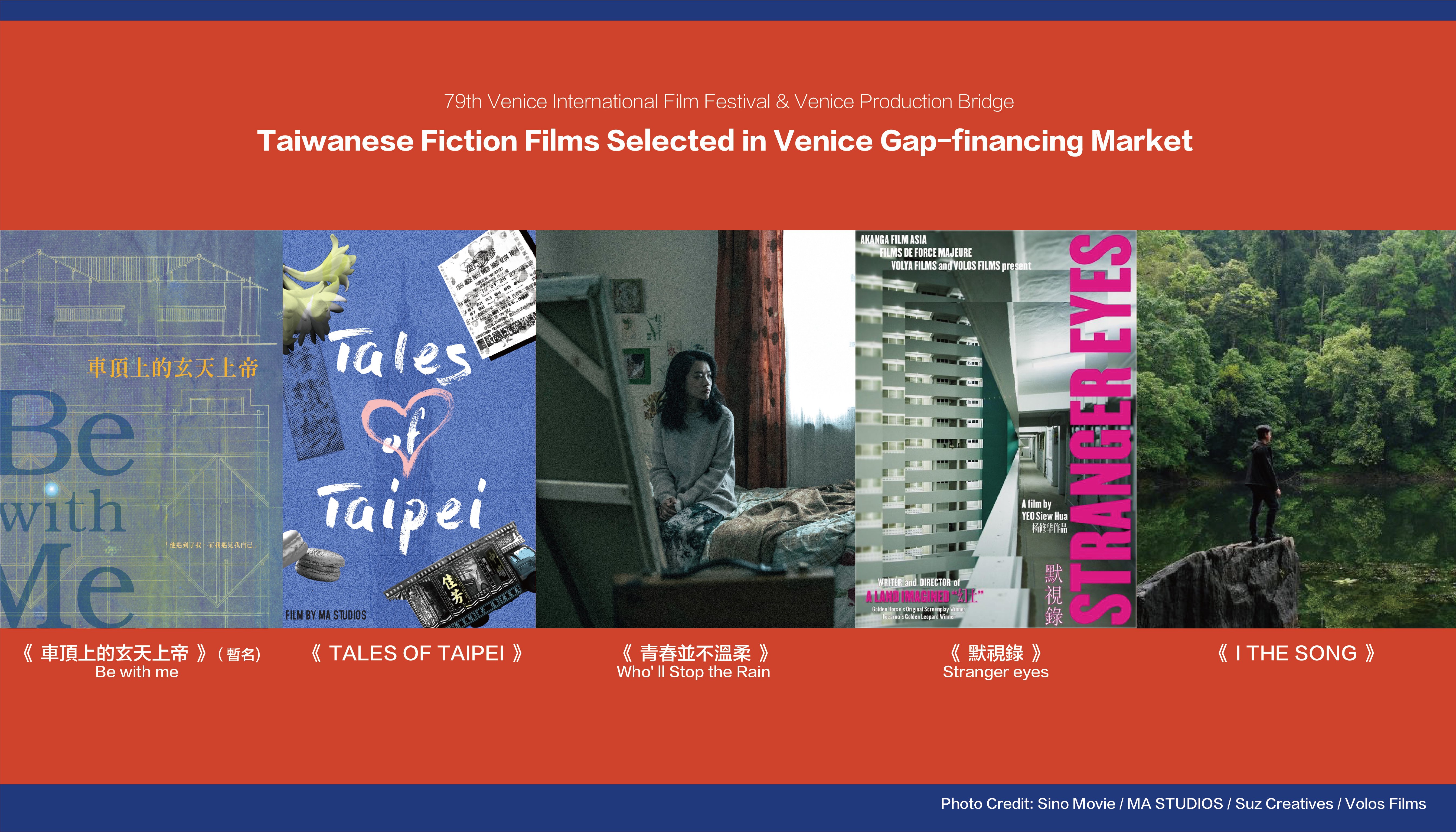 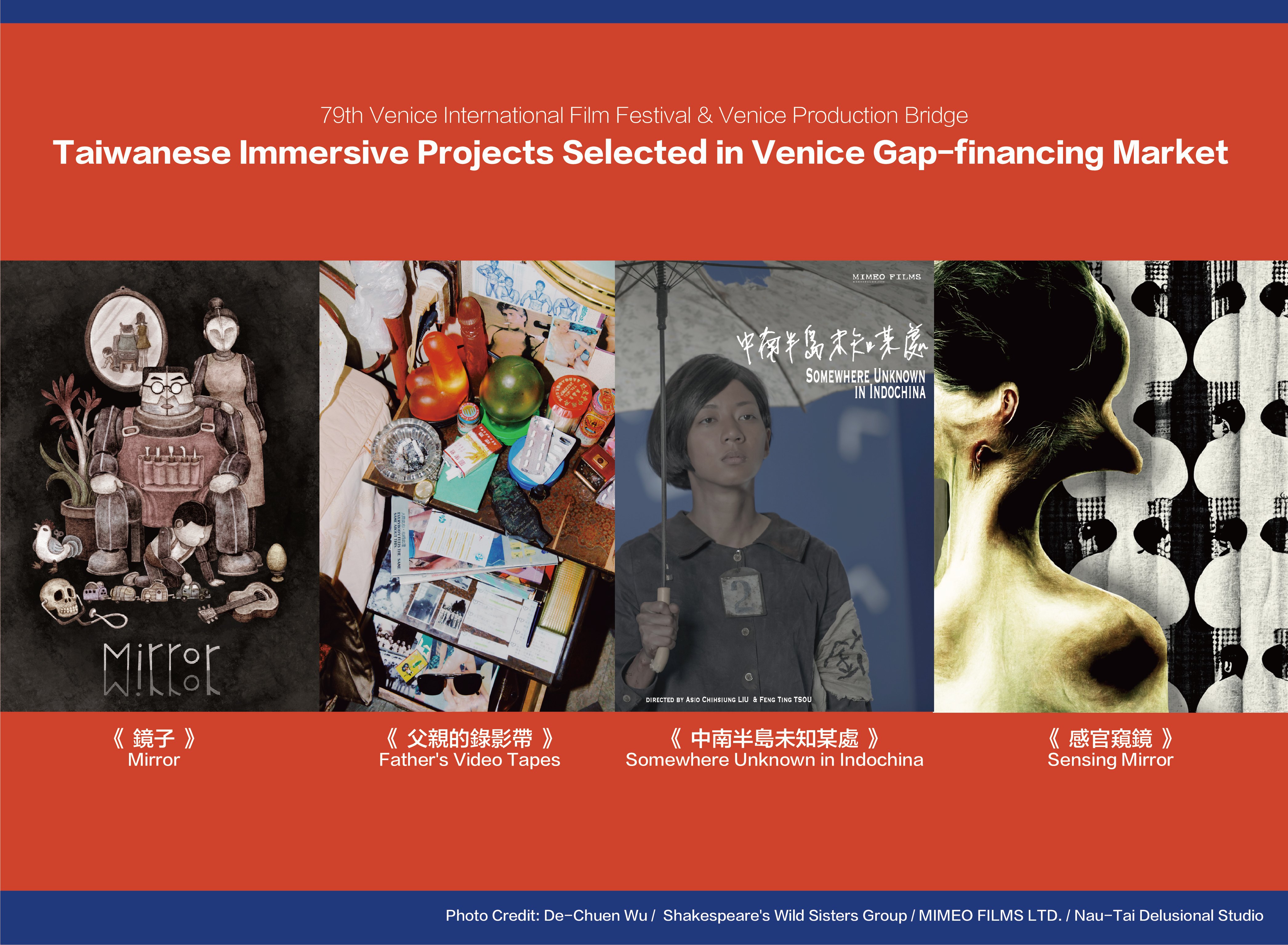 An important partner to the film industry are the publishers and literary agencies who take part in the VPB Market Book Adaptation Rights Market. Last year, this Market facilitated over 280 one-on-one meetings where publishers present their entire catalogue available for film adaptation. This year, TAICCA recommended The Grayhawk Agency, Dala Publishing, and Emily Books Agency to represent Taiwan during this three-day event.

TAICCA has also helped finance and support several films featured in this year’s festival including the Orizzonti (or Horizons) category selection For My Country (Pour la France) by Algerian-born French director Rachid Hami; and The Last Queen, a costume drama by Algerian co-directors Damien Ounouri and Adila Bendimeradone that is  one of only eleven selected to compete in the independently run Giornate Degli Autori (Venice Days). Furthermore, three titles nominated to the Venice Immersive Competition are All That Remains, produced by Riverbed Theatre with support from TAICCA; The Man Who Couldn’t Leave, a project exploring the stories of the victims of the White Terror Period in Taiwan directed by Singing Chen; and the winner of the Golden Horse Award for Best Animated Short Film, Fish Wang’s Red Tail. Finally, selected for the Venice Classics section is A Confucian Confusion by the late Taiwanese director Edward Yang, which has been remastered in 4K by the Taiwan Film and Audiovisual Institute with the support of Yang’s wife, Kaili Peng.

In addition to extensive representation in the Venice Markets and competitions, Taiwan’s presence will be celebrated for the first time through a market booth in the Venice Immersive Market. The Taiwan Pavilion is accessible both online and in-person and aims to open further networking opportunities with industry representatives, showcase projects from Taiwan, and facilitate potential collaborations in order to strengthen industry links and push creative boundaries forward.